What is the meaning of curating now? 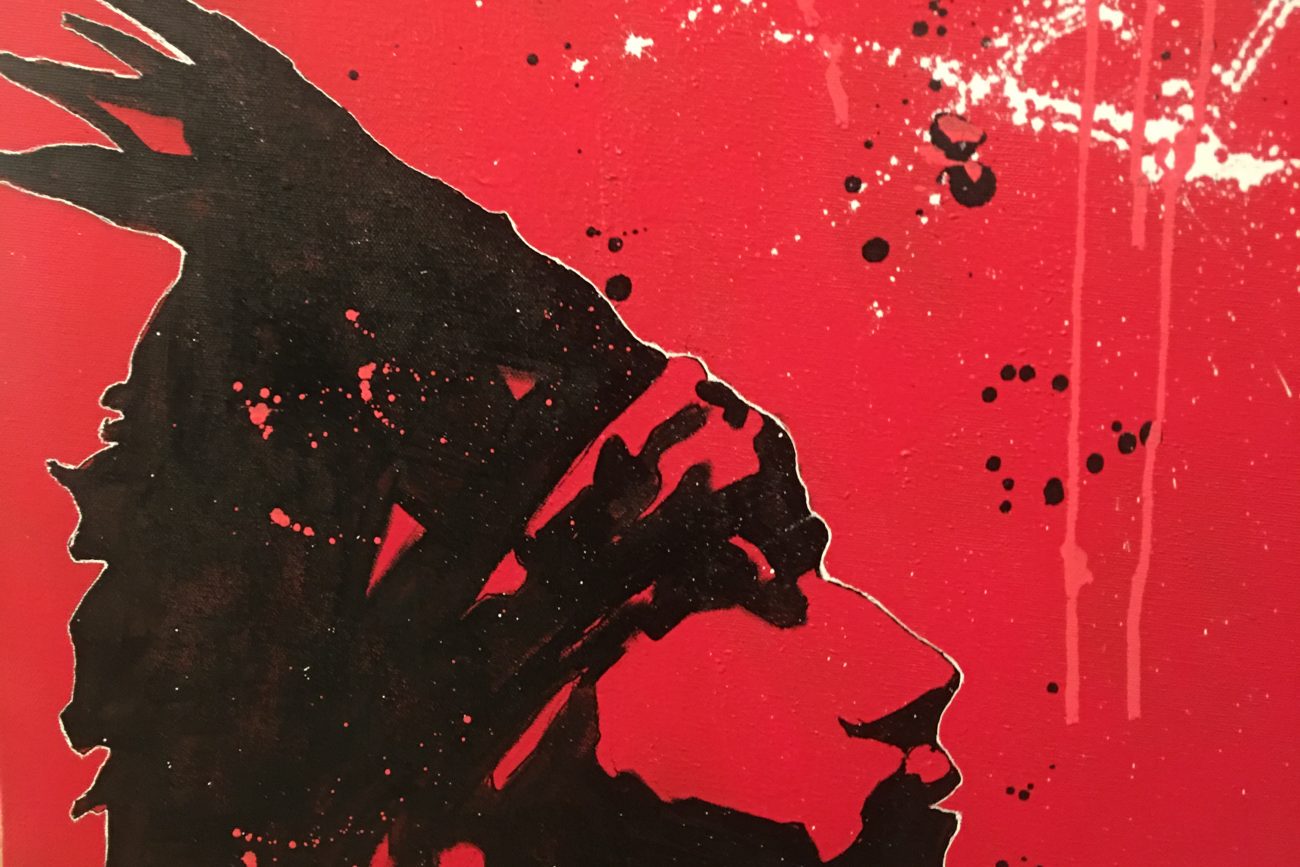 Joel Rosario Tapia is a fellow in the Providence Biennial’s inaugural mentorship program for emerging curators, Providence Curates. The mentees will explore the theme of “commemoration” in concurrent exhibitions in 2023; PAL invited the curators to reflect on the growing and evolving field of curation as practice.

My Name is Joel Rosario Tapia known to many as the artist Tapia and as Chief Tureygua Taíno  Cay Superior Chief of The Cibuco-Bayamon Taíno Tribe. I am a Professional multi-hyphenate artist and cultural practitioner and entrepreneur, owner of the art and design contracting company Caona Contractors and curator through my gallery Da Art Dealers. I am passionate about Indigenous cultures and how they relate to modern day popular cultures. I was born in Providence, Rhode Island to parents from “Boriken” or “Borinquen” or what is currently referred to as The Commonwealth Island nation of Puerto Rico. I consider Rhode Island my homebase.

I began curating because as a sought after artist, cultural practitioner and project and event manager, the opportunity to curate public art exhibitions was a natural next step in my practice towards providing opportunities in my community and expanding the reach and influence of my work. In this ever-changing environment of social upheaval, economic instability and unprecedented change, I think that the definition of words like Identity, Art and Curation are changing. Being active and influencing this movement is an opportunity to create lasting, meaningful change that is of the highest priority.

So the question beckons: How do I define curation?

I define curation as the work of assessing, compiling and presenting human expression to the collective consciousness of Human Beings in the context of the trends and developments happening civically, socially, culturally and in perception. Curation in art museums today is not expected to undergo massive change, but curation today in the “Real World” is growing and accelerating at a white-knuckle pace through social media feeds and content creation opportunities–where the line between promotion, branding and good ole American consumption is being blurred.

In my curation, artistic practice and writing, I am inspired to inform, educate and uplift voices, events, art and ideas that resonate with my values and being. There is a wealth of culture in my city and its communities. Primarily, I am inspired by the innate value of tradition and the ingenuity in commemorating ancestral symbols to reinvigorate modern urban identity.

I utilize Indigenous cultural themes, motifs and totems in my urban artwork, animating symbology that originates in my Arawak-speaking Taino1 ancestors’ cosmology/cosmogony, which seem to have all but been forgotten in the modern day.2 This same lens informs how I curate and what kind of work excites me.

In my daily practice, I produce media, social media postings which present alternative perspectives through my stewardship on and about modern identity, historical truth and spiritual practice. From my private gallery space Da Art Dealers, I have explored mobile curating to decentralize and deinstitutionalize access to culture. Through PVD ART Circuit I have been taking groups on private, curated voyages through the city.3

In the world of Indigenous culture and fashion I produce custom made ancestral themed clothing or Regalia. This clothing is called  “Sarobei” (Arawak, meaning cotton garment) which is traditionally worn ceremonially by Indigenous cultural practitioners in the Caribbean.  My variations are garments of which I have adapted to be worn in colder climates filling the need for cultural practitioners to wear representative regalia and ceremonial clothing in climates outside of their homelands. Living culture intelligently adapts. The exacerbating circumstance of Environmental Racism and Discrimination has caused the migration of over 440,000 people representing about 12% of my homeland, Puerto Rico, or Boriken’s population over the last ten years.4 Today More Puerto Ricans live abroad and in the United States than on the island. Introducing this to the public as well as practitioners curates change in the mind of the observers which causes a shift in the paradigm and dynamic of practices and allows new ideas and perception to grow.

I bring my lifelong study of numerous perspectives on curation and art production to my work with the Providence Biennial for Contemporary Art’s Curatorial Mentee Program’s upcoming exhibition theme of “Commemoration.” I am building cohesion to present my ideas, artists and artwork in an exhibition I propose as Remedy.

I will curate with the ideas of repair and remedy through profiling work and dialogue of practitioners, artists and photographers who represent the richness of my Providence community. I am particularly interested in those wrestling with the idea of their own identities in the context of the dominant culture and adverse paradigms.

I am approaching this in my own unique way.

Cohesion between the curatorial mentees is necessary, yet the identity of each and their ideas should be connected broadly, not narrowly defined. We aim for cohesion through aesthetic presentation, graphics and media, yet the impact of each part of the exhibition may be felt differently depending on the demographics of the audiences in attendance. As I work in multimedia as part of my ongoing artistic practice and my curating; I will create introductory video montages framing the artwork of individual artists, including their trajectories and perspectives in order to create a flowing presentation that contextualizes each work and artist in their human experience.

I will work with artists who exhibit the strength of their individual identities in their work: their daily walks, the events they produce and their larger visions. Artists and creatives who maintain the integrity of their views on lineage and community while presenting themselves to the General Public. I like to provide a  few examples so Readers can research Examples of artist that represent themselves to the world in this way. Expect to see Artists like:

These artists and movements are happening here in Providence.

Their Ideas and Vision are the molds reshaping the future.

I think an ideal expectation for these exhibitions and curating in the future would be that peace  and cohesion and forward movement and productivity happen in conjunction, through  communication, open mindedness and teamwork, all executed in community in order to realize a vision.

So what can Folks look forward to Next Year?

I think art enthusiasts, collectors and Folks can look forward to multimedia, visual art, and performances and the idea of healing the rifts existing in our communities, our country and our  society through Empathy and working in community.

1 Arawak is one of the largest language families in the Western Hemisphere ranging as far as Peru to Puerto Rico, with about forty living languages. Groups of Arawak speakers migrated from the Caribbean coast of South America as far as the Antilles. Taíno was the first Indigenous language encountered by Europeans; at least several dozen Arawak languages have become extinct since the European conquest. For more, see Arawak Languages.

2 Cosmology is the study of the structures of the present universe, while cosmogony is concerned with the origin of the universe.

3 Among other experiences, PVD Art Circuit traveled to Any Blank Canvas Gallery and collaborated on a real-time digital installation with Eean Johnson.

5 Savonnara Alex Sok is a Cambodia/American visual artist based in Providence, Rhode Island. He engages his community through live painting events, murals, and working with youth. He has worked as a Teaching Artist and is currently the Visuals & Media Arts Coordinator at AS220 Youth. His work is rooted in his Cambodian heritage and is influenced by the experience of growing up in America as a child of refugees fleeing the Khmer Rouge genocide. His work is BIPOC centered and he takes inspiration from  themes of love, death, community, social and racial injustices, and human nature.

6 As covered in the Independent Music News Site Northern Transmissions, “Medicine Singers’ music is described as ‘genre-smashing kaleidoscope of sound firmly rooted in the intense physical power of the powwow drum.’ ‘Hawk Song,’ written by band member Ray Two Hawks Watson, is a modern powwow favorite which infuses the Eastern Algonquin tradition with a rock edge. ‘The guitar turned it into a rock song,’ says bandleader Daryl Black Eagle Jamieson. ‘The two styles mesh together so well, it’s like a fireball taking off, and you can see it in the audience when we play it live.’ With hand-held footage of the band performing ‘Hawk Song,’ the accompanying music video – directed by Roy and Gigi Ben Artzi….The creation of Stone Tapes was inspired in part by Jamieson’s work as an artist and activist, and to make a space for traditional musicians to collaborate with other experimental artists. One dollar from each Stone Tapes album sale will go toward a charity of the artist’s choice. For Medicine Singers, the funds will go to Jamieson’s organization Pocasset Pocanoket Land Trust.”

7 Lilly Manycolors is a mixed media visual, performing and teaching artist and scholar. Manycolors’ works focus on topics of Indigenous sovereignty, Land animacy, race & gender futurities, and non-more-than-human and planetary ontologies. Manycolors is a teaching artist and critic at Rhode Island School of Design in the Theory & History of Art & Design and Teaching & Learning in Art & Design departments and Project Open Doors. Manycolors’ current works are focused on youth programs for elementary to high school students.

Joel Rosario Tapia is known as TAPIA, Tureygua Taíno Cay and Chief Tureygua. He is an aboriginal urban artist of what is currently referred to as Puerto Rican descent, and a cultural practitioner of Boricua.
Tapia was born in Providence and served two tours of combat in Iraq with the US Army. He is the Superior, the Chief of the Cibuco-Bayamon Taíno Tribe, and an active voice and writer in the Indigenous Rights and Taíno diaspora. His work is influenced by indigenous Taíno Culture and hip-hop. He is a multi-hyphenate and creative director, and was the 2021 RISCA Folk Arts Fellow.
Tapia practices independently, and is the professional project manager of Caona Contractors LLC. He curates urban and indigenous BIPOC centered shows from his private gallery studio, “Da Art Dealers” in Providence. He also administers yearly Areito (Indigenous Caribbean celebrations). Tapia is an author of two books on his artistic body of work, Ab-Origin and Kiss The Girls and is a co-author of the Implications & Ramifications of the Artificial Black Identity: Including a Legal Chronology of the Americas 1492 to 1968, Editions I and II, 2019/2021. Tapia is a member of Providence's Racial and Environmental Justice Committee.