From the PCG Archives – Student Perspective: Tamara Gonzales, Cosmic Recess and The Snake 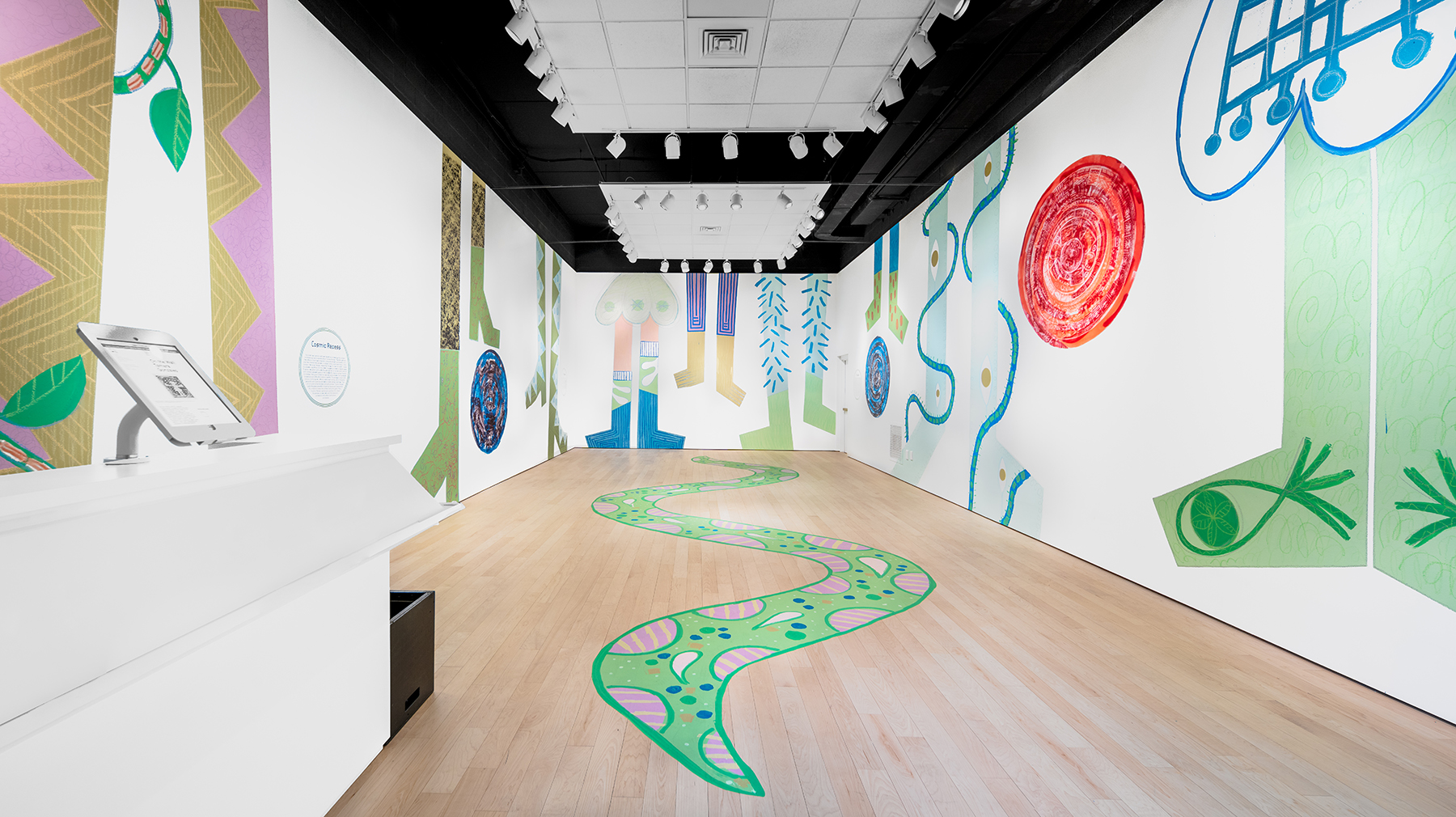 When looking at art, snakes are one the most frequently portrayed animals, and additionally are often are the most popular symbols. Therefore, it is no surprise to see it appear in Tamara Gonzales’ mural. The snake tail is archetypal to Gonzales’ art, appearing in a similar fashion in her Ó Lua exhibition at The Pit gallery in Glendale, California as it does in On the Wall: Tamara Gonzales.

Throughout cultures, snakes are seen as both good and bad. Christians often view the snake as representing evil and deceit. This symbol stuck and was often connected to Satan, especially in Renaissance and Baroque art. However, in other cultures, snakes are also seen as positive attributes, representing fertility, renewal, and power. In Mesoamerican culture, specifically for the Aztecs, snakes are extremely important, connecting to themes of rebirth. It is a symbol of great power. The Coatepec “hill of the serpents” was sacred ground for the Aztecs, as it was dedicated to Huitzilopochtli, the sun and war god.

The serpents served as architectural elements, which it does for Gonzales too. In many of her paintings, such as Videira de Cobra Para as Estrelas [Snake Vine to the Stars] (2018), we see a snake-like figure twisting and outlining the canvas’, adding an architectural factor to the paintings. In this painting, a border surrounds Gonzales’ centered figure, perhaps another snake tail. The tail encloses the central image emphasizing the figure and serving as a visual aid.

Additionally, in the Aztec culture, serpents are said to be associated with water, and the turquoise serpent (xiuhcoatl) connects to celestial events and bridges together the sky and earth. Gonzales has always been inspired by Spanish and Mesoamerican art, so incorporating the snake motif was no coincidence. For her, the snake is a powerful natural element meant to guide visitors through the gallery at On the Wall: Tamara Gonzales. When creating the mural, Gonzales was constantly thinking of movement and the natural events that make visitors look up. The figures on the wall pull the viewers’ eyes up as if entering into a canyon. While we are looking up, Gonzales was curious about what could pull the eyes back down. The snake was the tool used to accomplish this—her own version of bringing together two worlds: the walls and the floor. As the walls and ceiling acted as a canyon, the snake mirrored a river, going back to the Aztec association of water. It is a powerful force, zigzagging through the room. The form created the desire to look down equally as much as viewers wanted to look up. The twisting motif works as a guide leading you through the room. Visitors want to follow the snake’s form, similar to how you would follow a creek or river. When Gonzales painted the snake on the floor, it took on a new meaning as a powerful visual element, becoming something different from the snake tails she’s previously used. The snake in On the Wall: Tamara Gonzales is an architectural guide that connects back to the Aztec sacred spaces. The doorway into the gallery acts as a threshold, creating a new perspective of sacred space—a cosmic realm. Perhaps the snake is acting as its own deity in this sacred space and guides you on the journey through the gallery.

Sarah Kirchner '21 is an English and Art History major and VRC/PCG student worker.