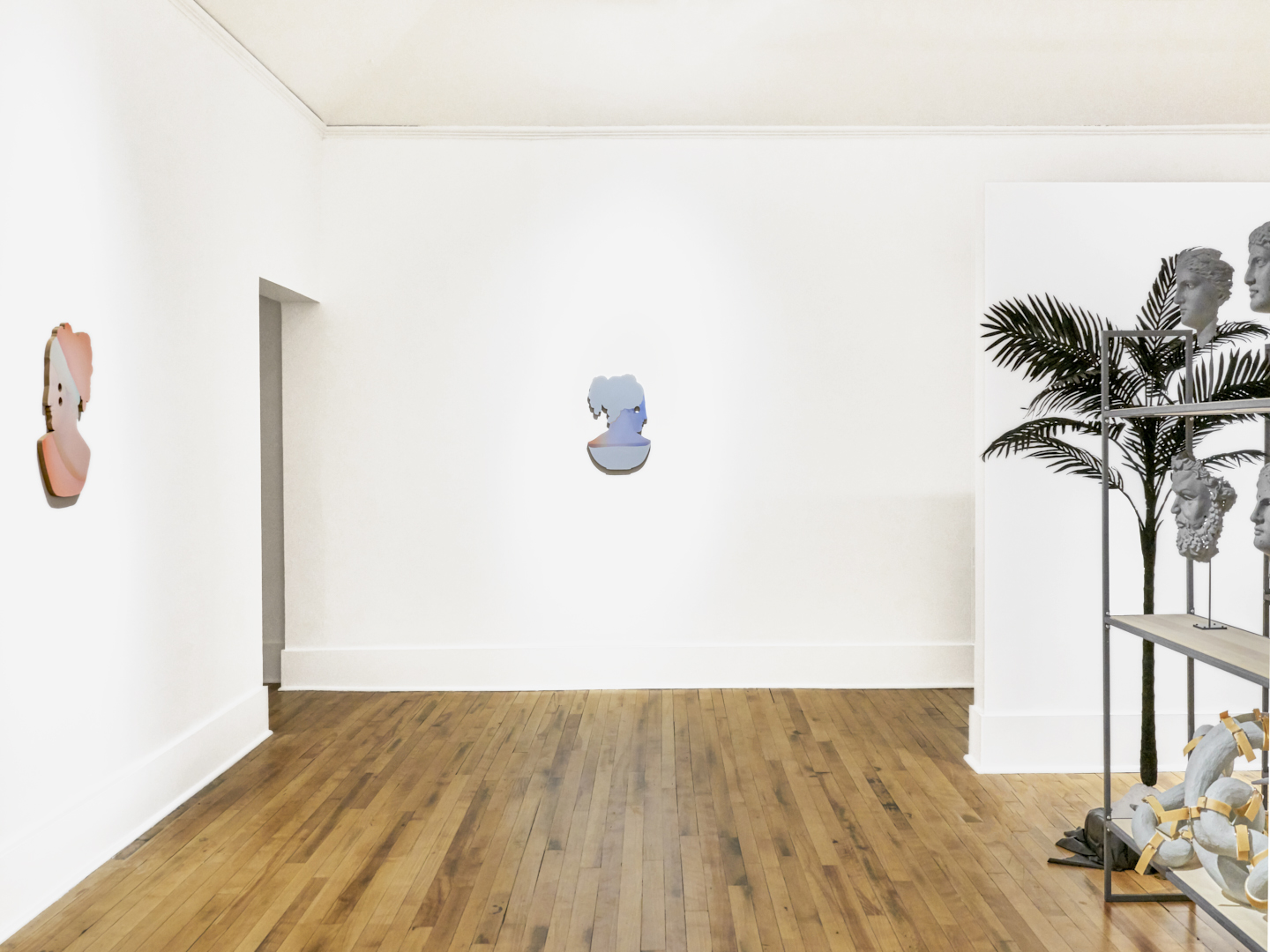 The idea of beauty has been evolving since the beginning of time. It was especially depicted and celebrated in Ancient Greek art. In attending Providence College Galleries’ exhibition, Classic Beauty: 21st-Century Artists on Ancient [Greek] Form, visitors are able to see how artists put their own influence on to concepts that were already perceived as beautiful.  What was most intriguing about this installation was how it demonstrated that ancient ideas can still be relevant in today’s very evolved society. While we certainly do not live the same lives as citizens of ancient Greece did, our values draw some similarities from each other than can be depicted in the works seen at this exhibition.

While multiple pieces on display in the Hunt-Cavanagh gallery, Vivian Greven and Kirstin Lamb were both present and spoke at the gallery’s opening reception. Greven spoke about how she chose to represent the human form in her pieces on display while Lamb highlighted her work’s ability to capture chaos in a single moment and its depiction of class hierarchy as it relates to classical beauty. Each of these two artists was able to duplicate or draw inspiration from a classical work and use it to express her own ideals. For instance, Greven’s silhouettes used the same basic form and look of an ancient Greek bust or painting. However, Greven chose to incorporate her thoughts on human connection into the theme of her piece as well, leaving cut-out emoticons in the faces of the silhouettes. Lamb chose to duplicate embroidered pieces that she found in various places and hang them. After hanging them in a pleasing order, she would paint the pieces as they were arranged, as if to capture the gallery in one second of time. Though each of these artists chose to duplicate or draw ideas from different aspects of classical beauty, they represented what is seen as beautiful in stunning and remarkable ways.

Walking in to the Hunt-Cavanagh Gallery, the eye was immediately drawn to the right wall where Greven’s largest piece of the exhibition was installed. This piece is the profile of a woman’s head with a “<3” affixed to the wall in front. In today’s age of technology this symbol is meant to represent a heart. The woman’s face does not contain any detail or features that could identify it as a specific individual. Instead, it is simply a blank face with no expression or distinguishing characteristics. With the heart symbol in the middle of the profile, protruding from the wall, Greven emphasizes the emoticon as the most significant aspect of the piece, in turn highlighting the reduction of the human form to this simple emoticon. In contemporary, technology-reliant culture, we are forced to reduce ourselves to emoticons or brief texts to truly relate to the people around us. There is a lack of true communication between people, instead we are forced to sum up our feelings into quick text messages or silly pictures that do not truly grasp the emotions we are feeling. Greven’s representation of holes in the body are also important, with the empty, negative space signifying a lacking or missing feeling. It relates back to the feeling of missing communication or true connection with others.

The ideas of classical beauty that Greven employs come mostly from the way in which she depicts people in her work. They are seen as perfect profiles of human beings and represent the basic ideas of true beauty that were especially emphasized in ancient Greek society. She redefines this form in a way that is relevant in contemporary society through her use of common symbols seen in today’s technology. Similarly, she defines society’s ideas of beauty as mostly outward through her depiction of good-looking bodies. In today’s society’s definition of beauty and self-image, Greven uses the emoticons as a way for people to describe their feelings on an extremely superficial level. There is no true depth to the use of an emoticon and in using these in her work, Greven seems to suggest that people today lack depth in their communication and connection with others.

Kirstin Lamb’s pieces at this exhibition were less about beauty in the human sense and more about beauty in the material definition of the word. In her work Lamb finds beautiful things and arranges them in an aesthetically pleasing way. She then captures that pleasing arrangement of chaos in a painting as if to pause for just one second in time. Lamb uses a technique of painting in which she replicates an embroidery pattern with paint on a canvas. The significance of using embroidery in her work is the idea that embroidery was done by the women. It was a rather chastising and patronizing act, as this was all women would be allowed to do. In representing these feelings of oppression in women, Lamb uncovers her own values of feminism and the abandonment of a patriarchal society.

Lamb’s work also emphasizes the ideas of classical beauty as it relates to a social hierarchy. The pieces she is organizing come to look like a collection when they are completed. In older societies, the only people who would be able to own such collections would be the wealthy. Collections were purchased as a way to highlight the family’s power and status in society. They were also used as a way to represent what that particular group of people found beautiful as compared to society as a whole. In the specific pieces shown at this exhibition, Lamb draws a lot of inspiration from French classical beauty. The wallpapers and elegance appear to pull from the same ideas of beauty in French palaces and aristocrats’ homes.

The beauty that we see represented in early art is, at its most basic, superficial. Beauty is represented by power and status, especially in the earlier French periods. Similarly, beauty is an outward appearance rather than an inward feeling, as can be seen in the portraits. Greven and Lamb took these ancient ideals and related them to modern ideals of beauty and representation. Greven’s idea of the human form being reduced to a simple emoticon shows that in today’s society, true human emotion is not communicated as thoroughly as it should be. It also relates to the idea that we are losing the connection between people and also to our true selves. There is no way to fully understand another person’s emotions or ideas simply through a text message or technology, and because of that we have lost a connection to humans that should have been cherished. Lamb’s work represents the idea that true beauty depends on class and is therefore unachievable for those who do not have status. Her work also brings in contemporary ideas of feminism and the ability to move past the patronizing society that was represented in the embroidery work seen in her paintings.

The works created by these two artists for this exhibition certainly connect to what we have learned in class. Lamb’s idea that a collection of works would be purchased in order to show off a family’s wealth relates to the homes in Pompeii that would create spaces of wonderful artwork that would emphasize the family’s status in society. They made it the most accessible part of the home as a way to make it possible to avoid noticing their wealth and ability to own such lavish decorations. The connection to these classical pleasure gardens shows the continued legacy of using art as a way to emphasize status and power throughout time. Greven pulls her ideas from a Greek myth, this draws serious parallels to Greek art that we discussed in class such as Exekias’ “Ajax and Achilles” vase. In works that draw from literary works, it is often assumed that the viewer of such work has a basic understanding of the themes and values highlighted in the text. In the case of “Ajax and Achilles,” we understand the basic plot and the characters, which helps to draw connections between the art and the story that we know. In Greven’s works on display in this exhibition, the story is less popular. We were, however, given some background and can understand how the details from the story are mirrored in the work. In her work Tru, 2017 we see the representation of the two lovers from the story in an oil painting on canvas. This is a new representation of otherwise already well-known characters, similar to the Ajax and Achilles story. Also, the portraits and their lack of distinction draw parallels to earlier Greek art from the Archaic period. Especially in the Archaic period, kores and kouroses were not meant to represent a specific individual, but rather to represent an ideal image of beauty. “Anavysos Kouros” for example, is not meant to show a specific figure who actually lived in history, but the general standard for beauty at the time. This connects to Greven’s work in its lack of individuality and the encompassing of all humans. This is a better way to elicit a response from the viewers because it is broader and can pertain to many different people. In doing this, Greven’s work reaches a larger audience, just as the work of the Archaic period did.

Though the standards of beauty have changed since ancient Greek times, drawing inspiration from these values and incorporating contemporary ideals is an effective way to highlight today’s ideas of beauty and human emotion. In their works shown at Providence College Galleries, Vivian Greven and Kirstin Lamb replicate the human ideas of beauty from ancient times while incorporating 21st-century ideology into their foundation and overall ideas. It shows how beauty and its ability to express power have changed over time and how we value beauty and communication in contemporary technology-centered society.